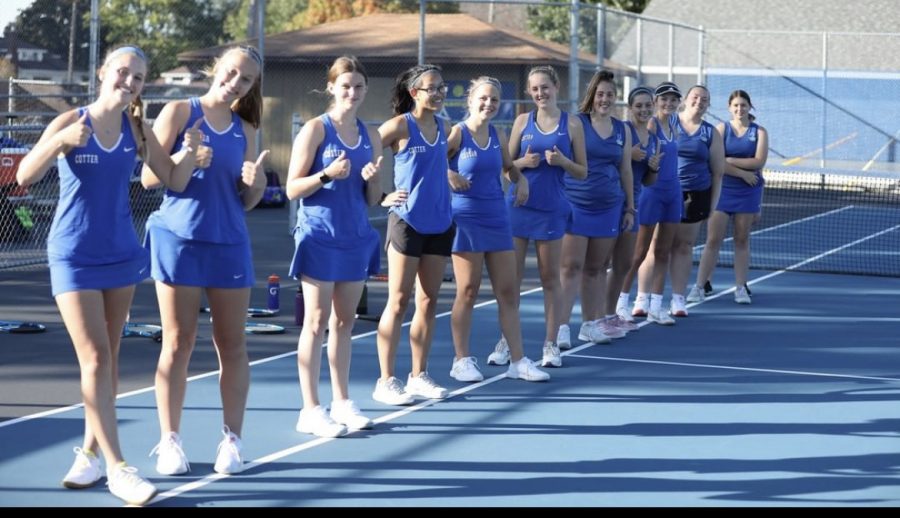 The Cotter tennis poses at a home meet. The team looks to lean on many returning players next season.

Sometimes you have to take a step back in order to move forward; that phrase perfectly reflects the Cotter girls tennis season.

Last year, the tennis team was led by a stud senior, Hannah Graff. In addition to Graff’s dominating presence at #1 singles, numerous volleyball players went out for tennis as a result of early season cancellation. This resulted in a dominating doubles team of the now graduated Abree Dieterman and senior volleyball player Alison French. Kaitlyn Ubl also went out for the ramblers, adding a significant amount of wins to the Rambler team.

This left many gaps in the team that had to be filled, but there was also a lot of room for opportunity.

“We never had a set line-up throughout the season, everyone was being put into different positions in the line-up, and we were trying to find a winning formula,” Anna Piechowski said.

Although lacking in age, the team has a lot of experience, which will should carry into next season. Three of the four singles players came from the junior class.

Elanna Kohner played #1 singles a majority of the year. Anna Piechowski spent a majority of the season at #2 singles. Also in that junior class is Grace Renk, who bounced around in #2-#4 singles throughout the year. These three will be the foundation for next season.

“Looking at our record this year, it is easy to say that we didn’t have the best season. What is often overlooked is how well we played. Despite team losses, we gained experience playing at a higher level and started to work cohesively as a team. This has set us up for fun summer camps to polish up and set us up to have a winning record next year,” Grace Renk said.

Most of the varsity starters will return last year. Aaliyah Brez, who played #3 singles will be returning.

In addition to Aaliyah, the doubles pairings also will be back. Olivia Moore and Hannah Casselman who played #1 doubles will be seniors next season. Josselyn Rolfson and Emily Soddy will both be returning after a successful #3 doubles season. Also Kendra Fritts, who played doubles with senior Mary Row will be returning.

Ultimately, the Ramblers best player this season was Piechwoski, who had the most wins for the Ramblers. As a team, the Ramblers only had one victory, meaning they won 4 of 7 matches one time. Although on paper the numbers weren’t great, they were many significant victories within the team.

One key individual win was against #1 state ranked Rochester Lourdes, as Kendra Fritts and Julia Staff won their doubles match in three sets.

Small wins like this may motivate the Ramblers for next season. Tennis camps will start in June this summer, the rebuilding starts then