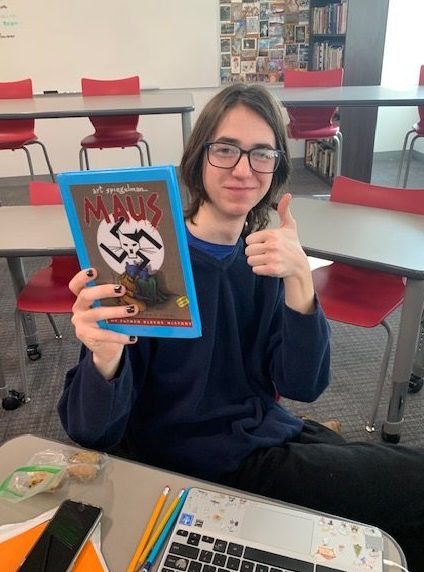 The reporter holding a copy of one of the most widely taught, and recently banned, comics in American schools, Art Spiegelman's Maus

Despite its well deserved reputation as a strong academic high school, Cotter  could certainly be a lot more hospitable to aspiring artists.

Every year I’ve been at Cotter, I’ve filled every available space with a new art elective. Much to my dismay, however, I realized that there simply weren’t enough of these classes for me to continue doing it for the full four years. After taking everything from intro to art to computer drawing to printmaking, where would I even go from there?

There is an obvious solution to this problem. Cotter needs more art electives, ideally enough to take at least one new art elective every semester. Now what those art classes are would likely depend on what kind of classes would benefit the most students, or what kind of classes would be the most popular. Something like graphic design would probably be the school’s top pick, and it would definitely be a class that I would be more than interested in taking. If we were talking about adding a class to the school that would be both practical and realistic, my pick would definitely be an advanced graphic design class.

However, I also have a less realistic, more fun answer. If I got to add a class to the Cotter curriculum in a vacuum, with no input from students, parents, or staff, and with no consequences for adding a class that nobody actually wants to take besides me, I would add a class for creating comic books.

It would incorporate skills learned in previous art classes, especially drawing and computer drawing, as well as skills picked up in writing and literature classes. It would be a culmination of several years of schooling, teaching students how to combine their artistic, writing, and storytelling skills to write, storyboard, draw, ink, letter, and color their own comic books and graphic novels.

It’s something I’ve always wanted to do, since a was a very little kid, and taking a whole class on it would be a dream come true.