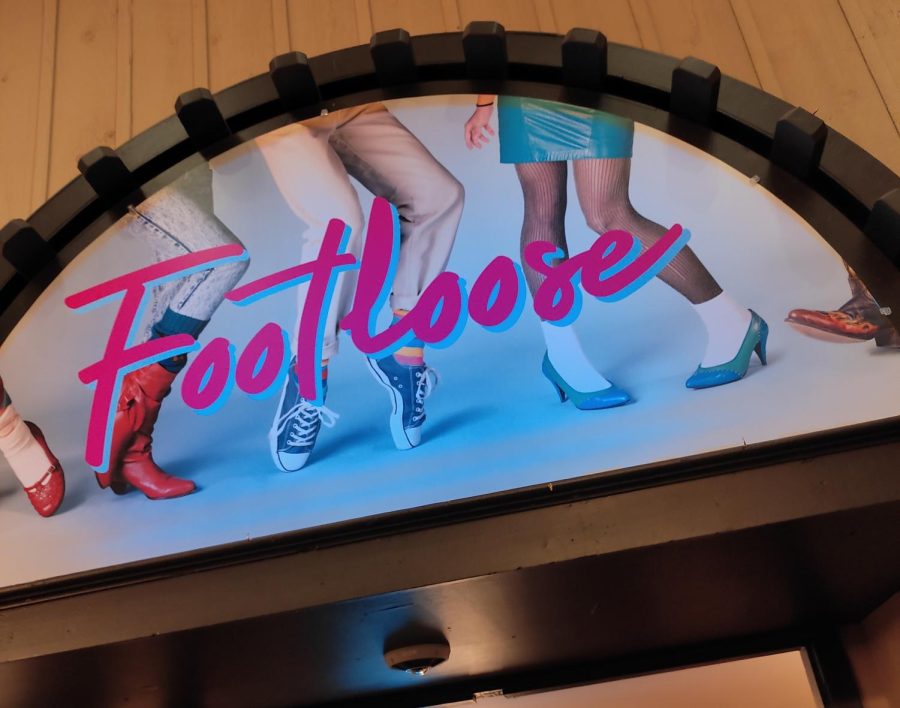 The sign at the theater where Cotter students saw the performance "Footloose".

Over the weekend of March 26 & 27, Cotter’s show choir students took their annual trip to Minneapolis.

At 11:00 am on Saturday they departed from the JNR parking lot. After two hours of traveling, there was finally a museum in their sight. No no, wait a minute, not a boring trip to a museum, it was something completely different. The Cotter group had landed at Paisley Park – Prince’s home and studio that drew people from around the world to attend his own concerts, tours, the club, and to simply feel a positive energy that he was spreading all the time.

In the park, students were not allowed to take pictures or videos until they came to  Prince’s club. To make sure that everyone follows the rules, the tour guides  gave people small pockets for their phones. They lock the phone and can be unlocked only by the tour guides again. Nonetheless, having no phone did not bother anyone.

Students saw Prince’s living room (he used to host parties there), office, three recording studios, a dance studio, a concert hall, a closet full of hundreds of shoes, and even his Oscar. Everyone learned a lot, whether they were interested in Prince’s music or not.

The student’s hit the Paisley Park gift shop at the end of the tour, then students headed to their hotel rooms.

They had some time to spend at the hotel swimming pool and hot tub, and right after that, everyone got ready for dinner at Chanhassen Dinner Theater. This is a special place where the restaurant is placed right in the middle of the audience of the theater. There, when you come, you eat your dinner first, and then you simply sit and enjoy the show for two hours.

The performance the students attended was an  amazing version of  “Footloose. All the students were amazed by the talent they witnessed on the stage. The choreography was very well-organized and the songs added a superb atmosphere. However, most of the girls fell in love with the actor who had the main part, Ran McCormack.

“The highlight from the trip based on student feedback was definitely going to the Chanhassen Dinner Theater. The food was phenomenal, and we had great seats in the theater! We were blown away by the talent on stag,.” Mrs. Jirele, the choir and show choir director, said.

Leaving with the songs still in their heads, show choir students went straight to the swimming pool again, where they stayed until midnight; talking about the great experience they just had.

Even though no one liked waking up early, the priest at the local church made students feel so much better, as he introduced them to the entire community. It made them feel very welcome, and they headed straight to The Mall of America.

They had the privilege to spend 2 hours shopping (most of them were trying to find a suitable dress for the upcoming prom and then graduation of course).

To end the trip, students bought some candy for their 2-hour drive back, and soon, they were at Cotter again.

Probably every show choir student will tell you how much they enjoyed this trip, but how was it all planned?

“ I began researching music-related activities that I thought the Show Choir would get a lot of value out of. I thought it would be a good idea to introduce the Show Choir to a local Minnesota legend, Prince, so I booked a tour of Paisley Park for the group. I also thought the Show Choir would enjoy going to the Chanhassen Dinner Theater, and Footloose was performing that weekend! The Chanhassen Dinner Theater performers are always so talented, and I knew they would really enjoy that experience,” Mrs. Jirele commented.

Remember, a show choir is a group of fantastic people and it is open to anyone with an audition. The students get to perform throughout the year during choir concerts and their own shows, and will in the future compete against different schools in the area!

“Next year, we can be excited about the collaboration with the St. Francis High School Show Choir, as the high schoolers will get to know each other better and they may even perform in a space such as the Basilica or even the Cathedral”

“We are excited to finish out our 2022 season with our Show Choir concert on April 24th and Pops concert on May 12th, and begin our next season!,” Jirele added