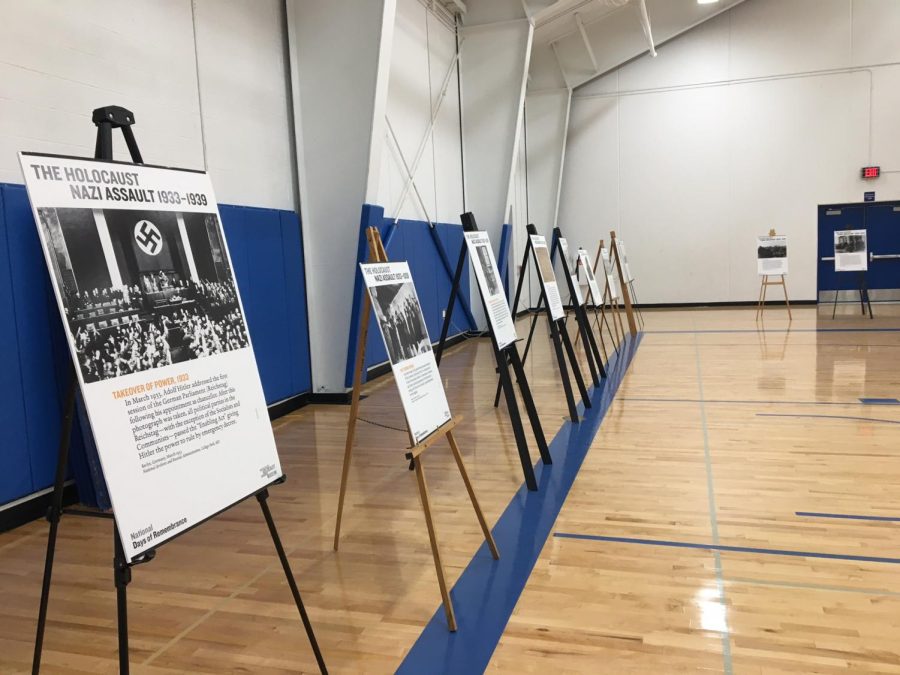 The Spanish philosopher George Santayana famously said “those who cannot remember the past are condemned to repeat it.”

On the April 26, 2022, Cotter students walked into JNR’s Centennial gym. Posters set on an eclectic collection of easels lined the room, and a huge, laminated world map splayed on the floor next to a bag of socks. Students, teachers, and staff roamed the room, shuffling silently in shoeless feet.

“Please take off your shoes in honor of this sacred space,” Mrs. Mary Hansel-Parlin wrote on her class’ information sheets the students carried into this space.  MHP is a Cotter religion teacher. From the 25-27th of April, various teachers brought their students to this Holocaust Remembrance Week exhibit.

According to the National Holocaust Museum website, in 2022 Holocaust Remembrance Week is observed (in the US) from April 24th to May 1st.

“This is the first time this has happened at Cotter,” Missy Schneider, the organizer of this exhibit, explained. Mrs. Schneider is an elementary school teacher and librarian at Cotter. She put together this exhibit from free posters given to the Winona area schools from the National Holocaust Museum. The posters explain the events leading up to the Holocaust, the atrocities that occurred, the heroes who helped bring the Holocaust to an end, and the events after the Holocaust.

The posters were not the only learning tool, however. A huge map of Europe was placed on the floor. “It was donated to Winona area Catholic schools several years ago” Mrs. Schneider said.

According to Mrs. Schneider, the map is used in this exhibit for geographical awareness of these events, particularly for the younger kids. “It is to have kids walk on it [in socks!] and understand the routes of how the Nazi moved the Jewish [to concentration camps and ghettos] and pinpoint different battles.”

Why should kids learn about the Holocaust? When asked this question, Mrs. Schneider mentioned that in Winona, and at a predominately Catholic school, kids do not often experience Jewish faith and history.

“Where we live in the Midwest we don’t experience a lot of the Jewish faith, it’s not common, but where I grew up on the East Coast I had a lot of friends who were Jewish.” With a smile, she further described her elementary students’ surprise when she tells them that Jesus was Jewish.

Furthermore, she mentioned that kids need to learn about the non-Jewish side of the Holocaust; “I also want students to take away that the Nazi manipulated their population into believing the Jewish people were entirely different.”

“I want students to take away from this [Holocaust exhibit] is genocide has not been eradicated from our world and it is happening on a daily basis. We need to remember the history and our past in order to understand what is happening in our world currently.”